Blogged for the very first time. 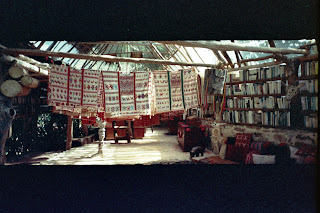 Let me introduce myself. My name is Jesse Rose Roberts. I have just arrived to my place of birth Yelapa, Jalisco, Mexico. I do not have Mexican blood in my veins. I am blond and blue eyed. I am however, technically, Mexican.
This blog will follow my adventure in homesteading here. I've got an amazing house to start with but it will take a lot of work to get it up to my standards.
I will also be venturing into other various projects, but more on that at a later date.

A little back story:
My parents Mary Beth and Jerry, who are mostly Caucasion and from the USA (hereafter referred to as "the States"), moved to Yelapa in the late 60's.
They were working artists and lived a bit like gypsies but with a home base in Yelapa. They had 3 towheaded children of which I am the youngest. We were born and were raised there until our father passed away from Dengue fever in Yelapa in 1985. At that time we moved to Western Sonoma county where we, for the most part, have lived since.

One of our parents closest friends, and our godmother, was named Peggy Muendel.
Peggy lived in Yelapa when my parents moved there. She was an extraordinary woman with exquisite taste who loved art, food, animals, Mexico and most of all great company.
Over the years after we moved back to the states we stayed very close. She would fly us down for Christmas and visit in the States.

Peggy grew up in New York and loved Manhatten where she had been an interior designer after graduating from Oberlin College with an art history major. She fell in love with Mexico while traveling in the early 1960's. Through a friend, she found Yelapa, not so easy in those days. She loved it and chose to make Yelapa her home.

Using the lush jungle surroundings as inspiration, her talent for creating beautiful spaces, and her patronage of the arts she built a masterpiece of a lifetime.
. My family has been so lucky to be invited back to make improvements and breath life into it again.
So I start my adventures here making this house that once was a home to us, home again.


Posted by Technical Mexican at 2:11 PM